While Isaac Dogboe may be short on international name recognition, he’s certainly not short on self-confidence. Not since “Prince” Naseem Hamed had a 50-foot billboard on the New York side of the Lincoln Tunnel. before ever stepping into an American ring, has a fighter in the lighter divisions come stateside from the U.K. with grand proclamations of greatness.

Among his lofty goals, are winning world titles in four or five weight classes, give or take, and to become the sport’s first pay-per-view star born in Africa. All this while he works toward his college degree.

Before that, Dogboe must make it through his first world title attempt this Saturday, when he faces WBO junior featherweight titleholder Jessie Magdaleno at Liacouras Center in Philadelphia, live on ESPN. Dogboe (18-0, 12 knockouts) has not masked his contempt for Magdaleno (25-0, 18 KOs), calling him “the worst world champion ever” for making just one defense of the 122-pound title he won in November of 2016, with his upset win over Nonito Donaire Jr.

“Everything that (Magdaleno) throws at me, I’ll absorb it but when I give back, he’s not gonna be able to withstand the power and aggression that I’m bringing to the table. I know that his camp, everyone is shivering; they are scared,” said the 23-year-old Dogboe, a U.K./Ghana dual citizen who was born in Accra and grew up in South London’s Brixton neighborhood.

“Everybody’s thinking Jessie’s just gonna walk through me because he’s been there; he’s a world champion. He’s this; he’s that but, at the end of the day, people are going to be surprised because the underdog always surprises people.”

Dogboe is unbeaten in 18 professional fights

Among Dogboe’s other attempts to get into Magdaleno’s head is a video he released of him flexing and growling, and declaring repeatedly, “I want my belt” in what resembles an early-1990s Ultimate Warrior promo. He’s a flashy, switch-hitting combination puncher, who delivers power to the head and body, and he isn’t reserved about telling people about his self-belief.

Dogboe has good reason to be confident. Magdaleno had been scheduled to fight mandatory challenger Cesar Juarez, a Mexican brawler as tough and durable as they come, before he withdrew with a hand injury in October. At the WBO Convention in Cuba later that month, Dogboe’s camp volunteered to face Juarez in an interim fight, despite warnings from WBO President Francisco “Paco” Valcarcel that Juarez was a very dangerous man.

Two knockdowns and five rounds later, the ring at the Bukom Boxing Arena filled with people in a scene reminiscent of the “Rumble in the Jungle” post-fight, and Dogboe was being lifted on the shoulders of his supporters.

“We have done Jessie Magdaleno’s job by beating Cesar Juarez, so they know what is coming,” said Dogboe’s father and trainer Paul Dogboe, who courted controversy with comments that he’d throw Magdaleno “over the wall of Mexico” and present the title to President of the United States Donald Trump. Dogboe has since apologized for the remarks, which he wrote off as pre-fight hype, after Magdaleno’s promoter Bob Arum condemned the “intolerant rhetoric” to ESPN.

The backlash hasn’t done much to silence Paul Dogboe.

“Isaac Dogboe is like a career-ender. Most of the guys that he’s fought, they never come back properly. We know, come 28th of April, we’re changing Magdaleno’s career,” said Paul Dogboe. “Maybe he’s gonna take a career in film or something. He’s going down.”

‘Give me four years of your life’

One of the sacrifices Dogboe has had to make for his boxing career is he didn’t go to university at the same time as his other classmates. He intends to resume his studies this September and has applied to several universities in Cardiff, Sheffield and Manchester. He looks to major in sociology and fighting in Philadelphia means he can visit Penn State, which he’s also considering.

“I know it’s gonna be a challenge but that’s something I always seek to overcome,” said Dogboe, when asked about balancing his boxing career and studying for exams. Studying social development will help him realize some of the charitable initiatives he hopes to undertake, if he wins the world title, like drilling boreholes to provide clean water in Ghana.

Dogboe is no intellectual lightweight. Born in Ghana, Isaac relocated to England at age eight, when his father got a job as an electrical mechanical engineer attached to the Territorial Army (now known as the Reserve Army) of England. He was a good student all throughout his schooling and his grandfather, who was well-off financially back in Ghana, had intended to send him to private school instead.

Father and son team – Isaac Dogboe and his trainer, Paul

“My daddy was so angry when I put (Isaac) in boxing,” remembers Paul Dogboe. “My daddy was crying, ‘Why would you put my grandson in boxing?’” Paul says he reassured his father by telling him Isaac is so elusive that he barely gets hit and pointed out his unmarked face as evidence.

Originally Isaac had favored soccer and played for a local team but, having topped out at 5-foot-2, figured he wasn’t tall enough to be an elite player.

“My father watched me play and was like, ‘Isaac, you’re too strong on the pitch. You’re just running and running like a headless chicken. Let’s give boxing a try and see how it’s gonna go,” Dogboe remembers.

“I told him, ‘Listen, give me four years of your life and then we’re gonna see where you’re gonna be,” said Paul. Within his first year, at age 14, he won the England Boxing Junior Novice Championships, and followed that with ABA Senior Novice and ABA National Elite titles.

When the 2016 Olympics were nearing, they had difficulty cracking through to the United Kingdom team, so they turned their attention to representing Ghana. Isaac Dogboe entered the African qualifier in Casablanca, Morocco, in August of 2015 and went all the way to the bantamweight finals, qualifying with a silver medal, after losing to the host nation fighter on a count back.

At just age 17, Dogboe was the youngest boxer at the London Games and faced Japan’s Satoshi Shimizu, the eventual bronze medalist, in his first round match. Despite being much shorter, Dogboe closed the gap quickly and landed repeatedly with right hands on the southpaw but lost by a point, 10-9. Paul was frustrated by what he says was a lack of professionalism with the Ghanaian team and he even left his job to assist his son at the camp in Wales, when his weight wouldn’t come down.

“That was the first time I had let my son out of my sight,” said the elder Dogboe. “Since then, I turned my son professional and have handled him since. Nobody has ever touched him because I was so pissed off.”

Paul Dogboe had never been a boxer. How he learned the sport was by tagging along with James Armah, a childhood friend and a decent pro fighter, who competed between 1996 and 2013, and watching how he prepared in the gym. He helped out the local boxers by sewing their trunks and escorting them to the hospital when the need arose, and later became a trainer with the Territorial Army Boxing Club. 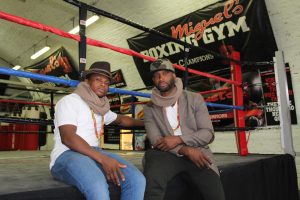 He says he trained his son to use moves learned from watching the fights of Azumah Nelson, the greatest boxer from Ghana and arguably all of Africa, and James Toney. It was by chance that Paul connected with Toney at a hotel in London back in 2013, when Toney was in the country to compete in the Prizefighter Tournament.

“I was the only black guy he saw in the hotel. He said to me, ‘Where can I get a cigar?’ That night I took him to Central London and got him the cigar and then I was talking to him about my son,” said Dogboe. Dogboe later took the living legend to Miguel’s Gym in Brixton to check out his son’s training. Toney took a liking to the young fighter and invited them to stay with him in Los Angeles.

Instead of signing with a major promoter, the Dogboes formed their own company, Rising Star Africa Promotions, alongside adviser Mike Altamura and manager Marwan Zakhem. After having their first two fights in Switzerland and the United Kingdom, they fought their next five fights in the American Southwest.

“After the Olympic Games, my father said to me, ‘Look, if you want to be the best, we have to take the long road. And being the best means you have to be able to fight everybody they put in front of you,’” said Isaac.

Before leaving the country, Dogboe stepped in the ring with Magdaleno for sparring at the Mayweather Boxing Club just prior to the Floyd Mayweather Jr.-Manny Pacquiao fight.

“They were supposed to go 10 rounds but they stopped the sparring in round six or something,” said Paul. “He couldn’t shake Isaac’s foundation at that time.”

‘Ghana boxing is back’

In 2015, when Paul’s father passed, the Dogboes returned to Ghana for the funeral. There Dogboe’s career has taken shape, fighting 10 of his last 11 fights. In Ghana, he has become a major sports star and his exploits have been followed regularly in newspapers. One person who has taken note of Dogboe’s success is President Akufo Addo, who invited him to a courtesy call in January, after he won the interim title.

“You are in the tradition of great fighters that have come out of this country,” Addo said, listing him among Ghanaian boxing icons like Roy Ankrah, Azumah Nelson, Ike Quartey and “Poison” David Kotey. “And now the mantle is on you.”

“Ghana boxing is back,” Dogboe said.

Past champions have also tipped Dogboe as the next star from Ghana. Quartey, a former WBA welterweight titleholder during the ’90s, told GhanaWeb after the Juarez fight, “If he works hard, there is no stopping him because he is that good; trust me. I think that he is a bit short but he is strong, so if he can use his strength, then his size should not be a problem.”

Nelson was also impressed with what he has seen. “I have always had confidence in Dogboe and what he did today was a demonstration for everyone to see what I have always been talking about,” Nelson said.

Should Dogboe defeat Magdaleno, Top Rank would have options on Dogboe’s next three fights. Altamura says they’ll have to work within the plans Top Rank has in mind but would love to see Dogboe bring a title fight to Ghana if there was adequate government and sponsor support for the fight.

“It would be a thrill for Isaac to be a true fighting champion, to travel the world, defend his title and become a true sporting star,” said Altamura, an Australian matchmaker, who handles fighters from around the globe. “No matter where a fight’s at in the world, there’s access for people to see it through streaming or network deals.”

Isaac Dogboe has hopes of making a similar impact in Britain, as he has in Ghana. First he has to make his statement in America.

“Having this title will open a lot of doors.”