Home / ADA-SPORTS / Opinion: Magdaleno-Dogboe and the State of Jr. Featherweight

Opinion: Magdaleno-Dogboe and the State of Jr. Featherweight

In this case, maybe it was all about the foundation.

Wilfredo Gomez wasn’t the first Jr. featherweight champion. The division had a short life in the 1920s and was reborn, first with the WBC and then the WBA, in the 1970s.

Bazooka is the one who made it matter. Jr. featherweight was the house Wilfredo Gomez built. From 1977 to 1983, he defended the title 17 times. His title fight record in the class was 18-0 with 18 knockouts. His victims included the great Carlos Zarate and Lupe Pintor in one of the great fights of all time.

A weight division that might have been scoffed at initially was legitimized much the same way Ricardo Lopez forced skeptics of a 105 lb. class to accept it as part of the boxing landscape in the 1990s.

Gomez set the standard for a class that has seemed to deliver an inordinate amount of action heroes. Jeff Fenech, Junior Jones, Kennedy McKinney, and Manny Pacquiao all held titles in the class. From 2000-2009, it delivered five of the decade’s ten Ring Magazine Fight of the Year winners.

This decade has been a little quieter but even it has had exciting battlers like Abner Mares, Carl Frampton, and Leo Santa Cruz pass through. Guillermo Rigondeaux was an exception to expectations.

Jr. featherweights are supposed to battle and it feels like we’re overdue for the next classic to break out. Could it happen this weekend?

Saturday’s ESPN main event (7 PM EST/4 PM PST) has potential though classic might be a stretch. 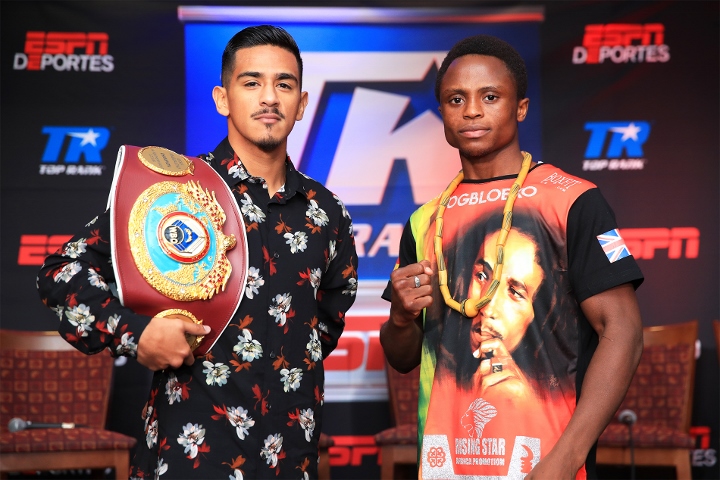 It matches a pair of young, undefeated fighters still looking to make their names. 27-year old WBO titlist Jessie Magdaleno (25-0, 18 KO) of Las Vegas has made one defense since winning the title from veteran Nonito Donaire in November 2016. 23-year old Isaac Dogboe (18-0, 12 KO) of Ghana is coming off a rousing win over Cesar Juarez that garnered some hardcore buzz.

This might not be the next Barrera-Morales, but it’s hard to imagine it being boring. Magdaleno is a skilled boxer/puncher with quick hands and good finishing instincts. Dogboe is heavy handed and typically brings the fight.

That’s enough of a recipe.

Whether the next wave of great fights will break out soon remains to be seen.

That’s really always been the allure. Jr. featherweight was, for a long time, about as low as an outlet like HBO would consistently go on the scale but they went there often, making the division a centerpiece of the early Boxing After Dark telecasts. Showtime made a home for the epic rivalry between Israel Vazquez and Rafael Marquez. Fans in the US who don’t always stray too low on the scale in bulk followed the action.

This weekend’s fight is chance to light the next wave of fires at 122 lbs. There is an interesting cast of beltholders, none of them yet a household name. None of them yet aged 30.

Rey Vargas (31-0, 22 KO) has, like Magdaleno, had some exposure on major American television. The 27-year old Mexican WBC titlist is becoming a staple on HBO and will appear there again May 12th. 27-year old Los Angeles native Daniel Roman (24-2, 9 KO) has won and defended the WBA belt in Japan and is staring at a mandatory against Moises Flores. 28-year old Ryosuke Iwasa bounced back from a knockout loss to Lee Haskins in his first title shot in 2015 to win the IBF belt last year. He has already made his first defense.

Is there a star in the bunch?

Roman and Magdaleno both have American origins that could make it easier for them to appeal on television. Vargas is having no issues getting dates. Presence is not the only ingredient to stardom. Delivery and rivalries matter in forging a new identity for the class. For now, no single fight has emerged as the destination the division is heading towards.

There is no particular demand for any of the champions to face each other.

Eventually that will change. It all starts with something that really gets the people talking. It would be a good thing if Magdaleno-Dogboe could really kick up some conversation.

If you’re reading this and you would rather see Jermall Charlo-Gennady Golovkin than a Golovkin-Alvarez rematch, you are not alone…This is a pretty good Saturday with ESPN dovetailing nicely into the HBO card with some Fox sprinkled between to tie up the DVR space…Infinity War is, of course, also this weekend and many fight fans may be DVR’ing everything. That’s okay. It’s a new Avengers movie. Some things just take precedent…So anyone have anything new for the Smallville Wall of Weird?…No clue how real the whole $50 million dollar offer to Anthony Joshua is, but Team Deontay Wilder certainly played the media relations game well this week. Kudos to them…Why was an immediate rematch between Jarrett Hurd and Erislandy Lara ordered? Was there some controversy about the first fight?